A Look at the Only Ghost Town in Poland

Ghost towns are fairly frequent in the world. A ghost town is a place that used to be booming with life and for one reason or another, is now completely empty. Usually, it is an economic failure or natural disasters that lead to these towns. They are very cool to see and visit because they have a ton of visible remains, but no one there anymore.

And while these are pretty common in countries like the U.S., in Poland, there is but one ghost town, called Klomino. This place was originally known as Westfalenhof and was a large military garrison and training ground for German troops.

However, after World War 2, it was renamed Grodek and was a base for the Red Army for a number of years and the town actually only existed on Russian military maps. But, since the Red Army withdrew all of their troops from Poland, the town has lain empty and is the perfect definition of a ghost town.

Klomino itself is located in a densely wooded area that used to be the former German province of Pomerania. This location made it a great spot for a military training ground. And in 1939, it is believed that about 60,000 military personnel resided in the barracks in the town.

And in late 1939, the Germans added to the responsibilities of this town as they also opened a POW (prisoners of war) camp there. At one point, it held 6,000 Polish soldiers and 2,300 Polish citizens that were arrested for one reason or another. Also, by 1941, the Germans had also brought over a significant number of French soldiers to be prisoners as well. In fact, there was nearly 4000 of them at one point.

But after being a German stronghold for years, the town was eventually taken over by the Red Army in 1945. And while the inhabitants of the town changed, it remained a military base, this time for the Russians. And despite the area being in Poland, no Polish people were able to go in there. In fact, the village was a total secret and never even appeared on Polish maps, only Russian military maps.

The place only housed about 6000 Red Army soldiers so there was a lot of unused buildings and material left, so the majority of that was taken to Warsaw to help rebuild it.

After the Soviet Union collapsed, the Russians pulled their troops from the area in 1993. For about a year, the town was guarded by Polish soldiers, but then it was eventually transferred to civilian authorities.

Since then, it has been an abandoned ghost town with an eerie feel to it. The Polish aren’t quite sure what to do with it, and it was even on the market at one point for 2 million euros. There have been a number of proposed suggestions about what to do with the area, but none have panned out. Everything of value has been looted from it and thus, it looks like Klomino will remain a ghost town for a long time to come. 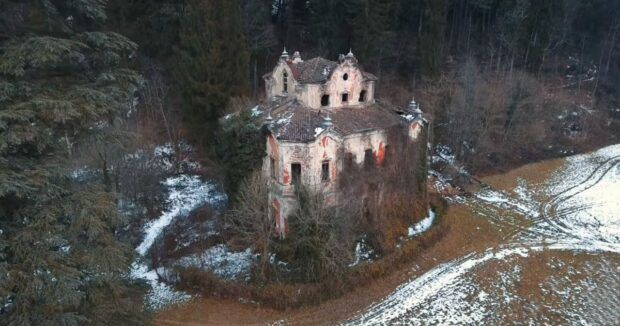 Stunning Abandoned Places Around the World
Long after humans leave the world, Mother Nature will still remain. And when she takes our place, things will change. That is the reason why abandoned places look so scary: We’re getting a ...
click here to read more
Advertisement - Continue reading below
Share  On Facebook

These Giant Retailers Have all Closed Stores in Recent Years

These Are the Highest-Paid Players in the National Football League

The Truth Behind Famous Band Breakups

Most Expensive Things Ever Stolen

Best Tropical Beaches in the World

Fitness Stars of the ’80s: Where are They Now?