There’s something about old buildings that can be creepy yet beautiful at the same time. Castles, churches, and schools, among others are remnants of the past that tend to be abandoned for little to no reason. What’s left can be hauntingly beautiful, and that’s exactly the case with an abandoned Catholic school that was recently discovered.

Finding these abandoned structures can be an art, and this old school was found by the YouTube channel “This is Dan Bell.” Bell is a filmmaker from Baltimore, Maryland who makes a habit of finding spooky old locations to share with his over 170,000 subscribers.

Some of the footage from his recent video is simultaneously beautiful and eerie. It perfectly displays a 19th-century Catholic school that has decayed greatly over the years. Despite its degradation, it still has some stunning interior features.

A few of the more noteworthy items found on Bell’s journey included classrooms and dormitories that are remarkably well-preserved, as well as old religious icons.

One of the most memorable visuals from the video was the school’s eye-opening cathedral shown in the first picture of the article. From it’s intricate stonework to its soaring arches, it’s really difficult to fully appreciate the rooms beauty without physically walking through the hall.

Although anyone can access the school easily enough as evidenced by filmmaker Bell’s adventure, many potentially valuable items are still there. Perhaps burglars and treasure hunters were kept away by the fear of God?

The religious icons and sculptures still seem to be in good condition and in their original position. One can only imagine how impressive it would all look in its original glory.

Besides just a place to learn, the school acted as a residence to many students. Some traces of their presence can still be seen throughout the dormitories, including their bunks and pictures hanging on the walls.

Even though the facility has been totally deserted for many years now, the structure and its contents still remain intact. Some of the rooms are even arranged in a way that looks like the students may come back at any moment.

If you enjoyed seeing the pictures, make sure to check out the full tour of the school in the YouTube video below.

The video has been watched over 100,000 times, and many commenters have speculated on what led such a magnificent school to fall into such a state of disrepair. Sadly, there are countless buildings like this that have simply been left for the deadly power that is time to eat away at them.

Make sure to share the story of this incredible abandoned school with your family and friends! 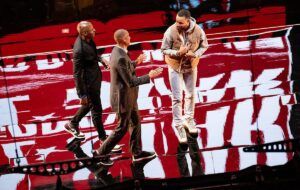 Nike Lost Stephen Curry After This Embarrassing Mistake
There is no denying that Stephen Curry is one of the biggest names in basketball. Though he has been overlooked at various points in his career, both on and off ...
click here to read more
Advertisement - Continue reading below
Share  On Facebook

The Legendary Late-Night Talk Show Moments We Want To Relive