Over the past several years, tiny houses have been all the rage. The tiny house movement is where hundreds (even thousands) of people are ditching large and expensive homes for smaller, more mobile and cheaper options.

The typical home in America is around 2,500 square feet and can cost hundreds of thousands of dollars. On the other hand, tiny homes often range between 100-500 square feet and cost only a fraction of the price. In a time when a majority of Americans are in debt or living paycheck to paycheck, this is often a more affordable option.

You will definitely need to make some lifestyle sacrifices if you want to live in a tiny house, and it isn’t for everyone. But while these sacrifices will be made, there are also a ton of great benefits. You will spend less money, do less damage to the environment and you can basically move your new tiny home anywhere you want.

All of these benefits are why so many people are switching over to a minimalistic lifestyle. These tiny homes come in a variety of shapes, sizes and colors — but this article will take a look at one that might just be the coolest (and most colorful) of the bunch.

Around a decade ago, while she was living in Washington, Taylor Painter-Wolfe found out about tiny houses. Immediately, she was attracted to the idea of them. She liked the idea of cutting back on material possessions and not needing to do constant upkeep to her living space. The idea of being able to move the home whenever she wanted, and to also make a smaller carbon footprint on the environment were other factors that motivated her decision.

Well, Painter-Wolfe (who is an art teacher in Oklahoma) decided to bring her idea into reality. She designed her own tiny house and built it in her parent’s driveway. The normal cost for one of these homes is between $20,000 to $30,000, but she hoped that by the end of it, her 175-square foot masterpiece would only run her about $10,000 to $15,000.

The first thing you will notice about her unique home is the color. Being a somewhat eccentric artist, Wolfe knew she wanted to add her own personal flair to her new tiny house. She decided on a rainbow paint job for the trailer and it looks simply magnificent.

If you were expecting the color to carry on into the inside of the home, you’d be wrong. The inside is beautifully crafted out of wood and is more functional than stylistic. Inside the home, she has everything she needs to live, and even has space left over for her adorable dog, Goblin. And as mentioned earlier, the home also doubles as a place for her to do her art, so you knew it had to include supplies for that. The place is not completely finished yet, but already looks wonderful.

Check out the short video below to learn a bit more about Wolfe and her unique creation! 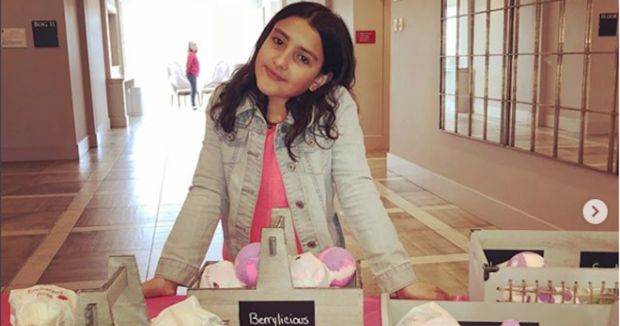 Watch This 11-Year-Old Girl Make Her Own Bath Bombs to Benefit Diabetes' Charities
Bath bombs – a hard-packed mixture of dry ingredients that release when exposed to water – have become a staple of the beauty industry in recent years. However, as seen ...
click here to read more
Advertisement - Continue reading below
Share  On Facebook

Celebrities Who Are Best Friends in Real Life

Celebrities Who Have Never Been Married

Celebrities Who Met Their Other Half in School

The Most Memorable Dogs in Television and Movies

The World’s Most Terrifying Haunted Asylums