Often, a massive mansion is the ultimate sign of financial freedom or success. However, for some, the traditional trappings of a big home just aren’t enough. Instead, they may be looking for a way to escape modern life. Angelo Mastropietro had the means and motive to do just that, and decided to build his dream home — in a cave.

Angelo Mastropietro first discovered the cave — which had actually been used as a rock house for more than 300 years until 1940 — in Worcestershire, England, in 1999 when he took refuge there during a rainy bike ride. Nearly a decade later, Mastropietro, who had moved to Australia for work, remembered the cave after he’d been hit with bad health, a bout of multiple sclerosis that briefly left him paralyzed.

“MS … was triggered by health and lifestyle, and that was the catalyst I needed to remind me that I needed to be mindful of my health and be respectful of my lifestyle,” he told The Daily Mail.  “I wanted to be in a place where I had a happier and healthier life.”

Remembering the cave, Mastropietro spent £62,000 (more than $80,000) to purchase it. Then, using a renovation budget of £100,000 (more than $130,000), he began transforming the cave into a livable space. He spent more than 1,000 hours, mostly by himself, breaking and cutting rock to carve out his ideal dwelling, eventually excavating between 70 and 80 tons of rubble by hand.

The completed cave house features air ventilation, numerous rooms of varying size, as well as amenities including  running water (sourced from a bore hole Mastropietro drilled himself), electrical wiring, and even Wi-Fi.

If Angelo Mastropietro’s cave house sounds like some place you’d be interested in escaping to, you’re in luck: The “Rockhouse Retreat” is available to rent on AirBNB at rates ranging from $244 to $333 a night. SHARE Mastropietro’s amazing cavehouse with your friends! 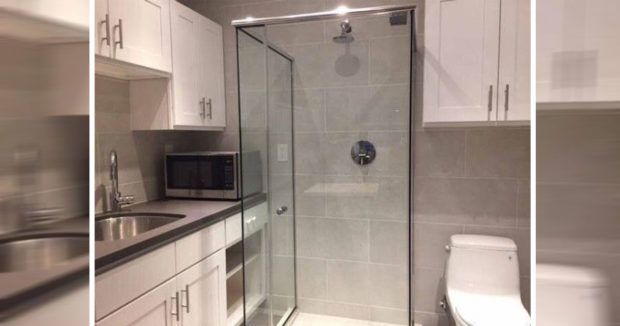 Worst Kitchen Renovation Fails Ever
Whether it’s poor architectural design or just downright ugly, some kitchen renovations should never happen. For the poor layouts, all it would’ve taken was a measuring stick to assure your ...
click here to read more
Advertisement - Continue reading below
Share  On Facebook

Old, but Not Forgotten, Wonders: The Most Beautiful Barns in North Dakota

Titanic Photos Revealed & What The Film Got Wrong

Fashion History: What People Wore the Year You Were Born