Tis the season for all sorts of spooky haunts! Some haunted houses are minimalist in their approach to horror, while some go the extra mile to shock even the most “game” participants. A few haunted houses are themed to recreate the top 10 fears in each room, while others go “all Hollywood” like the 13th Gate haunt in Baton Rouge, Louisiana. If that’s not enough, AirBnB also offers a chance for two occupants to stay at Dracula’s Castle in Romania’s Carpathian mountains.

That said, there’s one haunted attraction that’s so frightening, participants have to sign a waiver before they stay there. And here’s the real kicker – you can stay there all year round! The Shanley Hotel might be the most haunted hotel on the East Coast. Located in Ulster County, in the Shawangunk Mountains, this hotel has 35 rooms, complete with a hidden basement chamber, and most importantly, a large amount of paranormal activity.

It’s said to be so haunted that upon entering the establishment, many have reported, “feeling lightheaded, shortness of breath, heaviness and feelings of joy and sadness.” If that’s not convincing enough, according to Dose News, paranormal experts confirmed that there’s definitely some supernatural activity happening in this 18th century hotel.

All haunts have a story origin, and this particular haunting dates back to 1912. Shortly after the establishment opened for business, owner James Shanley’s three children died years a part from each other. The first, Kathleen, 5 months, died in 1912. The second, James Shanley Jr. died at four months in 1914, and the third William Shanley died at nine months old in 1916. After that, their lives continued to deteriorate with quite possibly the worst luck, including the death of Mrs. Shanley’s sister, who passed away during child birth, and the brother of Mr. Shanley, who died a year after Mrs. Shanley’s sister.

The Shanley Hotel was purchased in 2005 by Sal Nicosia, and since then the hotel has received a lot of attention. One Yelp reviewer wrote about her 2015 experience:

“I was standing alone and had something pull my hair so hard and jerk my neck back, that I ran screaming into the street. There wasn’t anyone near me and I am 100 percent sure of that! It frightened me and I loved it at the same time.

“We were trying to sleep at night and our sheets were pulled off of us and thrown to the ground.

“Doors will slam, objects will move and chairs will rock.”

If you’re open to staying (and signing that pesky wavier), here’s a spooky description of creepy treats you can expect from your stay:

“Empty rocking chairs rocking on their own, mysterious clock chimes, hot spots, cold spots, disembodied footsteps and whistling (said to be from the deceased former owner James Shanley), and children laughing when there are none around. Some guests have even reported seeing moving objects and apparitions, or feeling as if they’re being watched or followed.”

If you want to stay at the hotel-turned-tourist attraction, you can book the whole hotel for a group rate at $1,400 or focus on your own individual experience for a much cheaper price. 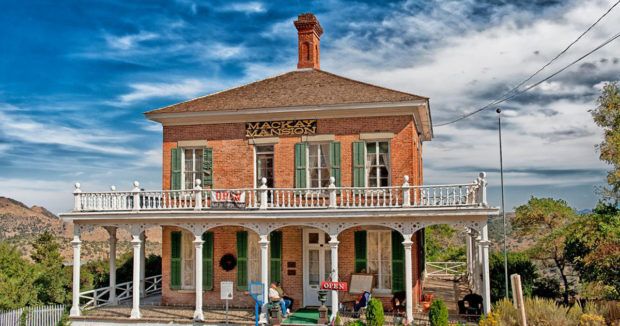 Fashion Trends That Make You Look Old and Out of Touch