13 Common Phrases That No Kid Can Explain

Every generation has its own unique slang and contributes to the evolution of the English language with news words, new phrases and new ideas. As society evolved, some phrases become outdated, with some kids these days not knowing the origins of these sayings.

Just as many of the words and phrases of today’s lingo will eventually become relics of history decades from now, we use a number of cliches that have all but lost their meaning.

As such, here are 13 phrases that we still use today, even though they’re basically outdated.

The phrase, “Clean Slate” is a reference to clearing a chalkboard and starting over. Now that chalkboards are mostly obsolete in today’s classrooms and replaced with dry erase or digital boards, today’s kids probably don’t know the origin of this particular phrase.

We now know the phrase “stay tuned” means to not touch the remote and stayed tuned into the program you are watching. It originally meant to keep the radio and tv dial to the correct frequency to not lose the connection.

Back in the day, people had to actually go to an outhouse in order to pee. Now that a majority of homes have an indoor bathroom, the phrase now means that you don’t have much, if anything, to your name.

Remember the good days of using a rotary phone? You had to literally take the time to dial one number and hoped you got it right the first time. Thanks to cell phones, some kids will probably look at a rotary phone and become completely puzzled.

Many youngsters think this term means you’ll see someone later. It actually means to turn over a vinyl record to listen to the b-side.

Years ago, mattresses used to be filled with hay. Hitting the hay meant going to bed after a long day, and not actually sleeping on a bale of hay.

At carnivals, cigars were often given away as game prizes. If you didn’t win, the carnie would tell the loser they were close, but not enough to win a prized cigar.

In order to keep a steam engine train operating, it had to blow off some steam. Now it just means someone has to cool off when they’re angry.

Before smartphones existed, people had to actually call an operator in order to connect with someone over the phone. The operator would use this phrase when they had to plug in a different cord to connect the phone call.

Before an operation, surgeons would have patients bite an actual bullet to distract them from the forthcoming pain. Aren’t you glad we have anesthesia now?

A broken or scratched vinyl record would often repeat certain words from songs over and over again.

12. Put through the wringer.

In order to wash clothes thoroughly, they needed to be placed through a wringer to get excess water out. It now means experiencing an exhausting and complicated obstacle in your life.

When miners would work on honey carts, someone would remove the breaks from the carts as a joke. This prompted miners to carry a small chain at all times to throw on the tracks in case someone decided to pull another prank. 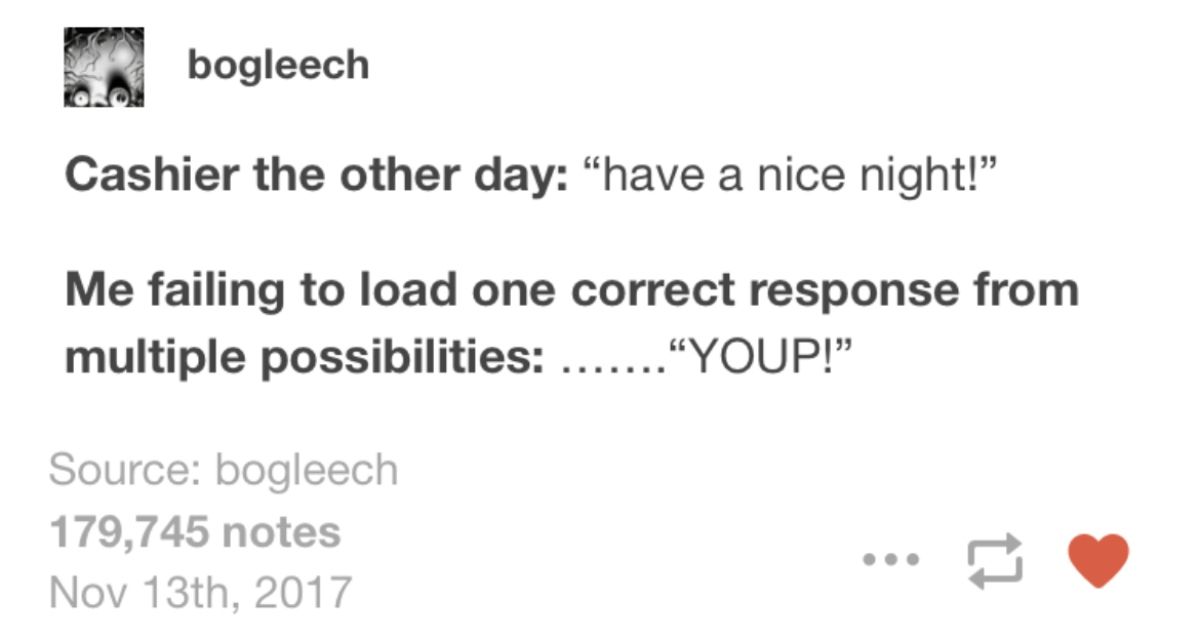 The Most Relatable, Hilarious Posts Tumblr Ever Gave Us
Ahh, Tumblr. Land of (mostly) millennial humor of all shapes, sizes, and genres. From the absurd to the nihilistic, the users of this site have got you covered with weird ...
click here to read more
Advertisement - Continue reading below
Share  On Facebook

These Are All the Things Millennials Are Wiping Out

Counting Down the Biggest NBA Draft Busts of All Time

‘Star Trek’ Behind the Scenes Scandals

Celebrities Who Tragically Lost Their Children Too Soon

What You Don’t Know About Iconic Mob Film ‘Goodfellas’