In the past few years, there has been a boom in the “therapy dog” industry. It seems that everywhere from universities to large, public companies have taken to using therapy dogs as a way for their employees or student’s to de-stress.

In case you aren’t familiar with how this all works, let me explain. A therapy dog is essentially a dog that has been trained to provide affection to people and comfort them during times of stress and used by a number of different places like schools, office buildings, nursing homes and more. They have shown to be an effective way of relieving the stress of individuals and, I mean, who doesn’t love playing with dogs?

And despite only really catching on in the last few years or decades, the history of the “therapy dog” can actually be dated way back to World War II. It all began in the jungles of New Guinea in 1944. In an abandoned foxhole, an American soldier found a little Yorkshire Terrier that was left alone.

Not wanting to leave it there to die, he took the dog back to camp and it was sold to Corporal William A. Wynne. The dog was apparently born sometime in 1943, and weighed in at only 4 pounds and stood only 7 inches tall. They decided to name her Smokey.

For the next two years, Smokey would accompany Wynne in combat and in travel where the living conditions were often horrendous and the weather unbearable. But Smokey remained by her owner’s side throughout it all and proved she was a very tough little dog.

And despite having no vet care and eating far from a balanced diet, Smokey never ever got sick. In fact, Smokey was a huge part of the 5th Air Force and was actually credited with twelve combat missions and was given eight battle stars.

She survived 150 air raids in New Guinea, made it through a typhoon, parachuted more than 30 feet and even saved Wynne and his friends from incoming shells on a trip. She was even given the role of stringing communication lines in the Philippines, a very dangerous job, which she managed to do in a fraction of the time it would take a person to do it.

In addition to helping them, she also learned various tricks to entertain the troops and she was an inspiration to them all. Once the war ended, she became a mega star and Wynne took her across the country and world to perform demonstrations and have people meet the legendary dog. Smokey would go on to be approximately 14 and died in 1957.

Not only was the dog absolutely amazing in helping soldiers with their morale and being a dedicated soldier, she also became famous. In fact, the dog was so well known and loved that it is believed that they actually helped to bring interest back into the Yorkshire Terrier breed, which had been pretty obscure to that point. This truly is one dog the country will never forget. 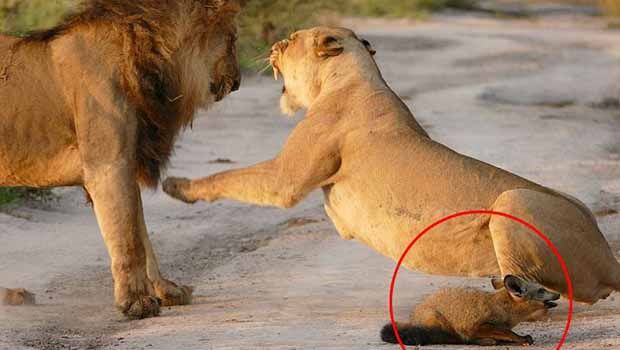 A Lioness Captures An Injured Fox, But What Happened Next Isn’t What You’d Expect!
Get ready for quite the ride as this lioness, her family and a brave fox take you on an emotional rollercoaster of love and betrayal. While traveling through South Africa, photographer Graham ...
click here to read more
Advertisement - Continue reading below
Share  On Facebook