Why Dogs Are Man’s Best Friend

They say a dog’s a man’s best friend,

With that, I will agree.

A better friend than any one

Of us could ever be!

From Ogden Nash’s “An Introduction to Dogs” up to Lone Dog’s “The Man’s Best Friend” – it is very obvious how dogs carried great affection for humans. Domestic dogs are sometimes referred to as “man’s best friend” because of their decades and more decades of close relationships, loyalty, friendship, and connection with humans.

Dogs’ natural connections to humans make them one of the best things that have ever happened to us. Here are some of the reasons why dogs are just naturally man’s best friend:

The fact that dogs regard their owners to be family is the fundamental reason why they are so protective of them. In most cases, dogs are used to having their keepers around, thus, they will respond more protectively in certain situations. Humans have learned to appreciate dogs’ abilities to keep them safe. Many individuals own a dog and have earned theirprotection and companionship.

They Would Sacrifice Themselves

Dogs often go to great lengths for their owners. They have been known to save their owners from a variety of perilous circumstances and have even put themselves in danger to help us. We know that whatever it comes down to, they would do anything to defend us, which explains why our connection to them is very strong.

They Assist When Facing Crisis

Crisis response dogs have been specially trained to deal with high-stress situations in order to assist individuals in remaining calm during calamities. Aside from being rescuers, they also aid our psychological recovery after a crisis. As per studies done by Purdue University’s College of Veterinary Medicine, when military veterans with PTSD have an assistant dog, they do better medically and psychologically. Veterans who had a service dog saw fewer symptoms of PTSD and better coping skills.

They Give Beneficial Relationship

Humans and dogs have developed a unique bond over the years that benefits both parties. Once we adopt dogs, we give whatever we have to them: love, shelter, food, and a secure environment. We took time and energy with them and as a result, we have built companionship, affection, loyalty, and tight commitment.

They Keep Our Lives Longer

Dogs hold our hearts for a variety of reasons, but according to a Mayo Clinic study, dog owners are more likely to be physically active, eat better, smokeless, and have lower blood sugar than non-pet owners. Having a dog in your life can help you live longer. Dog owners have a decreased risk of mortality. Dog owners also have a decreased risk of death, according to a comprehensive evaluation of studies published between 1950-and 2019. 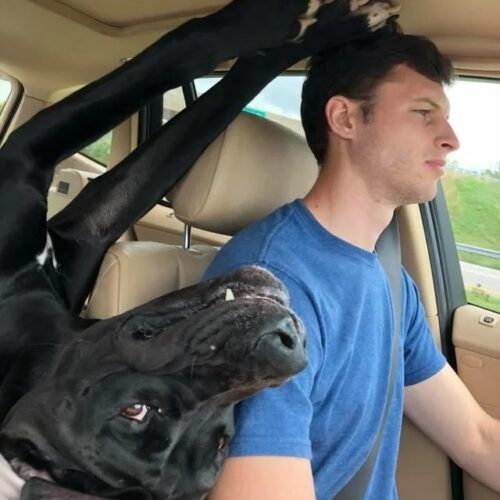 Hilarious Dog Pics That Will Brighten Up Your Day
What’s better than coming home after a long, stressful day at work to see your furry companion wagging his tail at the door to greet you? There’s just nothing that ...
click here to read more
Advertisement - Continue reading below
Share  On Facebook

Hilariously Awkward Family Photos That Will Make You Cringe

Wealthy Celebrities who Purchased Their own Islands

You Probably Didn’t Know These Hidden Facts About Law Enforcement

These Common Grocery Store Items Are Actually Terrible for You

SNL Controversies Through the Years