Shiver Down Your Spine: The Spookiest Spots in South Carolina

With a rich history that dates back to the colonies and the Civil War, it’s no wonder that South Carolina is filled with haunts. From theaters to pubs, there is definitely no scarcity of spooky spots to visit in the state. Here are some of South Carolina’s most popular haunted places to see the next time you visit.

The Powder Magazine remains the oldest building in Charleston, founded in 1713. It was intended to be a place where the people of Charleston could protect themselves. It has hosted battles, duels, and gun fights, making it a violent place filled with spirits. There have been reports of seeing the residual spirits of soldiers still guarding their posts at the Powder Magazine.

The Dock Street Theatre is Charleston’s first theater, opening in 1736. The theater was plagued with tragedies since its opening, ranging from earthquakes to fires. Some of the city’s most infamous lost souls can be found at the historic Dock Street Theatre, but two in particular — the ghost of Nettie and Junius Booth — are the most infamous inhabitants. A former prostitute, Nettie roams the theaters and has been sighted wearing a tattered red dress. Junius Brutus Booth is the father of Abraham Lincoln’s assassin, John Wilkes Booth. Rumor has it that he tried to kill the manager of the Planter’s Hotel, which preceded the theater.

Starting as one of Charleston’s most opulent homes and later becoming a ballroom, the Battery Carriage House has since evolved to one of the city’s most historic and haunted hotels. It is said that the ghosts of Civil War-era soldiers roam aimlessly around the hotel grounds, and current employees of the hotel report paranormal activity on the job. Rooms 3, 8, and 10 are known for having ghost inhabitants within them, converting even skeptics into believers. In fact, it got to a point where guests at the inn were so spooked that a psychic was called to vanquish the restless spirits.

The Old Charleston Jail is said to be, hands down, the most haunted location in South Carolina. The jail has locked away a multitude of crazed criminals, including the country’s first female serial killer. The prison is believed to be haunted by the souls of inmates that died during their incarceration. The wrongfully convicted, prisoners of war, and slaves have also been sighted inhabiting the creepy place. People have claimed to see human footprints suddenly appear on the ground and items vanish from sight.

St. Philip’s Graveyard is situated next to St. Philip’s Episcopal Church, a historic church established in 1680. Among those buried here are former U.S. Vice President John C. Calhoun and other politicians from the early days of this country. Creepily enough, an apparition of a ghostly woman crying over a grave has turned up in a photograph taken here. Also, witnesses claim to have heard strange noises, such as a baby crying in the graveyard.

6. The Old Exchange and Provost Dungeon

The Old Exchange and Provost Dungeon has a long, complex history. Before being the historical museum it is today, it was an old jail , a U.S. post office, and other businesses. The haunted museum highlights the history of both pirates and proud patriots that were incarcerated and tortured there. In the dungeon, people have reported hearing terrifying screams and moans of those who have suffered there. Also in the dungeon, there have been reports of chains swinging by unseen forces, adding to the bone-chilling vibe of the museum.

Poogan’s Porch is a restaurant named after a doggie spirit that is rumored to inhabit it. Poogan was a dog that was adopted by the owners of the restaurant, and he used to greet guests there. A multitude of ghost stories circulate of how he got to be there. One rumor says that the pooch was left behind on the porch of the house without reason by his owners and was later found by the restaurant owners. Another story is that Poogan was a neighborhood stray who would wander from porch to porch, always looking for his next meal, and he came across the owners who decided to feed him and keep him.

This peaceful, serene park has a sordid history of violence dating back to pre-Civil War South Carolina. Executions, gunfire, and Civil War battles are all part of the park’s past, making it a prime spot for spirits to hang out. Pirate incarcerations also make up part of White Point Garden’s violent past. It’s said that terrifying screams echo at midnight, and legend has it that when people stand near Water Street and glance down, the faces of the executed pirates stare back at them from the water’s surface.

The Pink House is now an art and jewelry gallery, long evolved from its origins as a brothel in South Carolina’s former Red Light district. Sightings of apparitions popping up in and out of photographs have been frequent occurrences over the years. Most commonly, the ghost spotted is that of a female who roams the third floor as though in wait of something, or perhaps even someone. She is said to be Anne Bonny, a female pirate with an unfortunate past.

Before being the bustling bar it is today, the pub opened in 1803 as an illegal speakeasy during prohibition. Although the Blind Tiger is said to be haunted by a range of ghosts, there is one in particular that has been sighted frequently: the ghost of the woman in the black dress. No one is quite sure who exactly the woman was when she was alive, but she sure has an unmistakeable presence now. Patrons of the pub claim that the female ghost likes to bother customers, even getting physical at times and pulling people’s hair.

The Unitarian Church Graveyard is home to many restless spirits, but one in particular is infamous. Locals of Charleston believe that the cemetery is haunted by Anna Ravenel, the daughter of a local doctor who died of yellow fever at age 14. Legend has it that she was placed in an unmarked grave to divert attention from a young soldier, who was her lover. It’s said that she still wanders among the gravestones where the young couple secretly met. Anna is widely believed to be the muse of Edgar Allan Poe’s last poem, “Annabel Lee.” 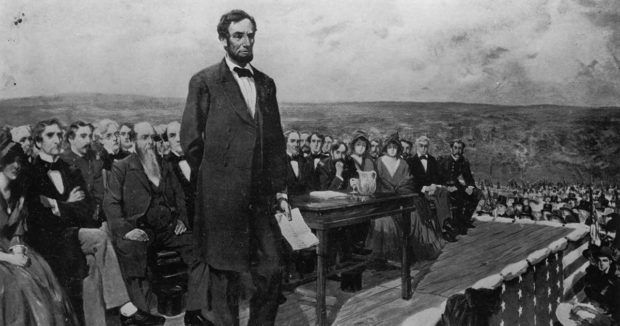 Consider Yourself a Civil War Buff? Take This Quiz and Put Your Knowledge to the Test
True story: During the American Civil War, an unknown Confederate soldier met with a Union soldier between the lines and said, “We talked the matter over and could have settled ...
click here to read more
Advertisement - Continue reading below
Share  On Facebook

Strangest Things Confiscated By The TSA

All The Celebrities We’ve Lost In 2021

These Are The Richest Athletes In The World