Creating a comfortable home isn’t just about picking the right paint color and positioning your furniture for a cozy feel. Adding a bit of your own personality into the design of your living room, kitchen, and other areas inside the house is also crucial.

Reddit user thepassionofthechris found an incredibly cool way to bring his kitchen to life. The project was pretty simple, but took five years to complete because of one crucial step — collecting the pieces needed to pull off his very personal project.

Chris (we’ll call him that for short), wanted to create a centerpiece in his kitchen that avoided the standard neutral colors of most granite and quartz countertops.

Throughout the process, Chris was faced with a massive sorting challenge, and he even messed up a few times. In the end, he took every lesson to heart and created a really unique piece for his home.

He then painted the countertop black for a finished look. Most people would have just stopped here or inserted a typical countertop product.

Next, he worked with friends to pattern the bottle caps in a way that would highlight a wide array of colors throughout the design.

It took a massive number of bottle caps to complete the design. Chris started planning for the project five years earlier.

The bottles caps kept trying to slide around, but eventually they got a hang of the process. They used adhesive to keep them in place. It was a messy but effective process.

Some bottle caps were flipped over to show off the inside of the caps. It provided for a very unique aesthetic.

After the caps were fully laid out, a thin layer of epoxy was applied. Too much epoxy would cause the bottle caps to float to the surface. The thin layer also assured that no bubbles formed between the bottle caps.

The epoxy took a while to dry, but the final results are stunning. You’ll notice a lot of black caps in the corners. Originally, Chris planned to have all black corners. He soon realized that a little splash of color in the corners made for a more stunning design.

Chris is incredibly proud of his final design and we can see why. It took hundreds of bottle caps for such an eye-catching design and it required so much effort to complete.

This must have been a fun project to complete. Basically, for five years, Chris was “building” his kitchen every time he cracked open a bottle of beer. That sounds like a good excuse to drink “just one more” Guinness at the end of the night!

If you decide to attempt the same type of project on your own, just remember to drink responsibly — I mean after all, is there really anything more responsible than spending five years creating the perfect countertop for your kitchen? 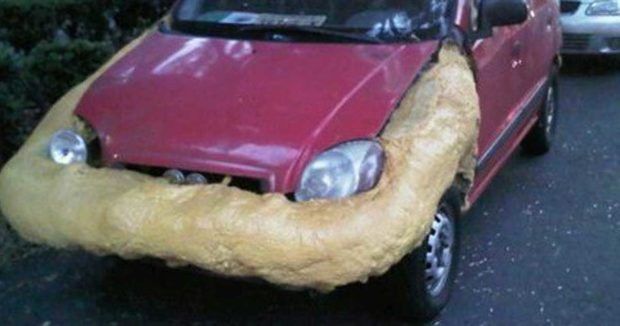 DIY Disasters: These People Should Have Called Professionals to Do the Job
Sometimes, when a home appliance or a car breaks down, you need a quick solution to the problem. You could try to fix it yourself if you are a DIY-oriented ...
click here to read more
Advertisement - Continue reading below
Share  On Facebook

The Greatest Western Films of All-Time, and What Made Them so Revolutionary

Worst Actors and Actresses in Hollywood

Yoga Poses You Can Do Right at Your Desk

These Giant Retailers Have all Closed Stores in Recent Years