Across all reaches of the world, there are dozens of gorgeous and historic buildings and structures at risk. Whether it is from time and natural causes or for the sake of modern expansion, these structures will soon be nothing but a memory.

One of those buildings is the Château de la Mothe-Chandeniers, which is in Les Trois-Moutiers in Poitou-Charentes, France. This is an amazing castle that is still, to this day, surrounded by a moat.

The castle was first built sometime in the 13th century and was once owned by the family who was in charge of reporting directly to the King. Although it may not be the biggest castle out there it is just as beautiful and serene as ever.

However, during its history, the castle took quite a beating. It was taken twice by the English in the Middle Ages. After being fixed and repaired, it was destroyed once again during the French Revolution.

After years of just sitting there damaged, a wealthy businessman bought it in 1809 and sought to restore it back to its former beauty and glory. Then, in the 1850s, it was passed to a Baron. However, in 1932, the Baron installed central heating and during the winter, a huge fire broke out.

This fire devastated the entire estate and if you were to go visit it today, it would remain largely untouched since the fire that destroyed it. It stood there for decades, withering away and decaying. But after a while in 1981, a teacher named Marc Demeyer bought it, with the hopes of fixing it up and show the world the full potential of the castle. And after years of fixing it up, he reported that his attempts at fixing it were sabotaged.

As it turns out, banks actually owned some of the areas around the Château de la Mothe-Chandeniers and built things in the area. What’s more, the land and the castle itself have several owners. Now the problem is, everyone is giving up on rebuilding this once great castle.

Without funding and some help from the public, this castle will likely soon be destroyed after being around for hundreds of years. 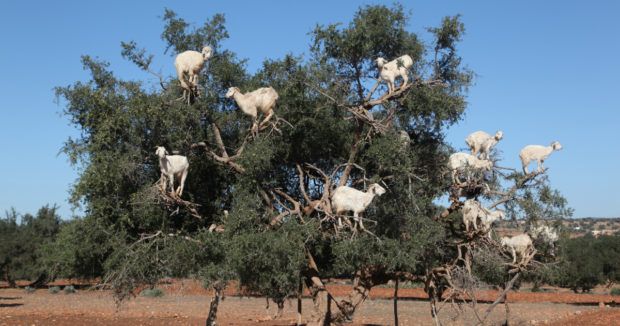 These Are the Most Surreal Natural Wonders on Earth
Most folklore has evolved from the uncanny in nature, but today’s science can explain the most surreal natural wonders. But even with our knowledge, we can’t help but be startled ...
click here to read more
Advertisement - Continue reading below
Share  On Facebook

Fashion History: What People Wore the Year You Were Born

Were They Real? See Which Historical Figures May Not Have Existed