For many, living in your very own castle seems like a fairy tale come true. Renovating one that has been uninhabited for hundreds of years can be a daunting task. It was just that for movie star Jeremy Irons, who purchased the ruined Kilcoe Castle in Roaringwater Bay, County Cork, Ireland in 1998. It took six years to restore the 15th-century Irish castle and close to $2 million before he and his wife, Sinead Cusack, could move into it.

“Kilcoe should be restored. Yet only a fool would do it. Someone with more money than sense. Maybe I’m the man,” Irons told the Irish Independent back in 2008.

Kilcoe Castle has quite a history. It was built in 1458 by the Clan of Dermod MacCarthy. It proved a hard nut to crack in battle because of its defensive location — surrounded by water — and therefore was one of the last castles standing in Carberry to fall to the English forces after the Battle of Kinsale. After its fall in 1603, it sank into disrepair until 1966 when James Caverly, the farmer who owns the surrounding land, registered the castle. In 1972 he sold it to Edward Samuel, who built a bridge connecting the castle to the main land but balked at the cost of restoring the building.

Enter Irons, who by the late 1990s found himself restless and in need of a challenge after growing bored with acting. Irons and Cusack retreated to the Irish seaside along the River Ilen in County Cork with their two sons, Sam and Max. The ruins of Kilcoe Castle –  which were 10 minutes by boat — became a favorite spot to explore on family outings. It was those memories that inspired Irons to look into buying Kilcoe and bringing it back to life.

“It was a load of amateurs setting to, following our noses. I told them all, ‘What you need to remember is that what we’re doing is a jazz theme on the medieval,’” he told Vanity Fair.

The castle is made up of twin towers. Its main tower stands 65 feet tall and the turret, conjoined to the second tower, is 85 feet. The outer pinkish hue was a curiosity to locals, but the idea was inspired by the soggy wintery weather which would flood the castle’s interior. Rather than leaving it a fortress of gray stone, the walls were covered in a thick layer of lime mortar coated with lime wash, a mixture of water, and calcium. It resulted in a Terracotta color.

The interior of the castle boasts a double-height main living area, approximately 32 x 40 feet, located on the third of the main tower’s four floors. Riffing on the medieval terminology, it is called “the solar” and is decorated with Irons’ keepsakes from his travels (including a life-size wooden stallion and a sword gifted to him by director Ridley Scott from the film Kingdom of Heaven).

The castle sleeps 13, with Irons’ master suite similar to “being inside an upturned boat.” However, this cozy castle offers much more than a good night’s rest.

“There’s something about the castle that generates the most extraordinary energy. Everybody stays up ‘til three, four in the morning — talking, listening to music, drinking. You just want to go on, go on. It takes a bit of getting used to, this place, because it does somehow produce an energy,” Irons told Vanity Fair. 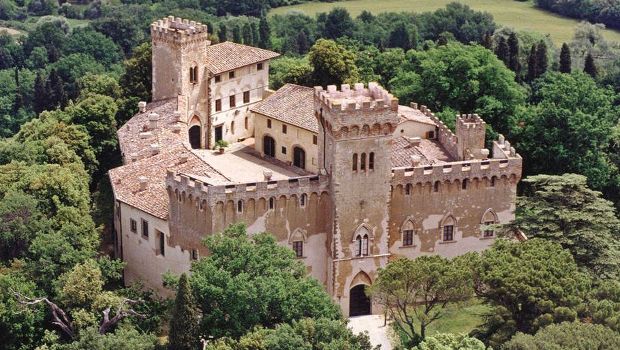 These Are 17 of Europe’s Most Stunning Castles You Can Rent on AirBnB
These European castles have taken the classic bed & breakfast getaway to a whole ‘nother level. From the lowest price and arguably least fancy – to the highest price and arguably most luxurious ...
click here to read more
Advertisement
Share  On Facebook

Facts About ‘Bonanza’ That You Need to Know